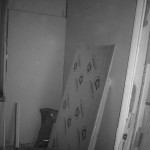 First of all apologies for the black and white photo – I’m not going retro – I didn’t have the correct camera settings!

This post covers one of the most important benefits which we were trying to achieve from the renovation of our Victorian London Apartment – thermal insulation of the external walls.  I am also going to cover the basic building physics on the insulation properties of our walls before and after insulation.

Our walls are solid brickwork, usually 500mm thick (although to certain elevations small sections are slightly less than this).   Before insulating, we installed all first fix services (e.g. wires for electricity back boxes).

Our preference would be to insulate externally.  This gives the benefit of the elimination of cold bridging, which is very difficult to achieve when you insulate internally.  The front of our apartment is in a Conservation Area, and is aesthetically pleasing, so external insulation is really out of the question.  To the rear, in theory it is possible, but it would require all other apartment holders to ‘sign up’.  Bearing in mind that there are 20no apartments in the block, all with different ages and circumstances, it would be very difficult to achieve a consensus.

You will recall from previous posts that we had to hack the ‘shot’ plaster away from the walls.  We applied the insulation directly against the stripped brickwork.  On reflection we should have either re-plastered the walls, or applied a parge coat (this is like a thin layer of plaster).  The reason is because masonry walls without plaster are not very airtight.  To some extent some of our concerns may have been addressed by the way we insulated as described below.

So let’s start with some basic building physics.  The insulation value of a wall is measured by it’s U-value – this is a measure of how much heat is lost through a given thickness of any material.  A U-value is the inverse of  Thermal Resistance (or the ‘R’ value).  The lower the U-value, the better will be the thermal comfort in the building.

To calculate either the ‘U’ or ‘R’ value, we need to know the thermal conductivity (or Lambda value) of the material.  This measures how easily heat flows through any specific material, independent of material thickness.  The lower the value, the better the thermal performance.

We applied two types of insulation.  The first layer which was applied to the wall was Celotex TB400.  This is 20mm thick, and has a Lambda of .022W/mK.  The next layer comprised Celotex PL4055 – this is a laminated plasterboard – it is constructed of 55mm of insulation, an integral vapour barrier and 12.5 mm of plasterboard (we used a tapered edge to help with the taping and jointing).  It has the same Lambda of .022W/mK  for the foam thickness, and .16W/mK for the plasterboard.  Our brick walls have a thermal conductivity of .770W/mK.  Before proceeding, we could have used a thicker laminated plasterboard, but we used two layers, as it was cheaper for me to do it this way using my own labour.

The first step is to calculate the ‘R’ value.  This is:

All of the ‘R’ values of each material are aggregated.  Based on the Lambda values and thicknesses above, our calculation was:

The total of the ‘R’ value is 3.318;  the inverse of this (i.e. one divided by the ‘R’ value) is .301W/m2K (note: this figure has been calculated using the formula above – no allowance for convection is included).  The latter compares with .30W/m2K, being the requirement in Part L of the Building Regulations 2010.  Not bad for a property in excess of one hundred years old!  By way of a comparison, the U-value of our walls prior to insulation was 1.17W/m2K.  As you can see, with an increase in the thermal performance of the wall of circa 74%, there has been a considerable improvement.

We fixed the boards to the walls using a continous line of gypsum adhesive.  It was also applied vertically and horizontally within the continuous band to form four equal quarters.  Most tradesmen use ‘dot and dab’ – this means dots (or dabs) of adhesive are placed on the wall in a grid like fashion.  The problem with dot and dab is that air movement is not restricted behind the insulation.  Joints between the 20mm board were taped using foil adhesive tape.

After the adhesive had dried, the insulation was mechanically fixed using 4no 160mm rawl screws, which were hammered in once a hole had been drilled.  The screws were inserted within the tapered edge part of the plasterboard.

The main areas which we found needed care, or were time consuming, were:

In future rooms, we considering using sheeps wool insulation, instead of foam.  This is because the material is breathable, and allows moisture to pass through it.  I will cover how this is done in a future post when the next rooms starts.

← Sanding Pine Floor Boards – I did them my way!
Internal Wall Insulation (2) →