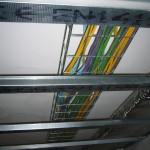 The last update covered the installation of the ceiling grid.  We found it easier to install the wiring into the containment system (this is the metal basket in the picture) after the ceiling grid had been installed.  The grid itself, and the duct work for the MVHR were installed in conjunction with the ceiling grid.

It has taken quite a bit of time to install all of the wiring – hence the period of time since the last update.

What is Home Automation?

Well it really depends on how sophisticated you want you system to be.   At the simplest, it is the transfer of the audio signal around the home.  This means that instead of carrying CD’s around the home, you can access you entire music collection in each room of the home from a central music server.

Most systems work by having a central hub, which is controlled using wall or mobile hand devices.

We wanted a system which fitted the following criteria:

To achieve the above we spent time discussing what the wanted the system to achieve with a Home Automation System designer.  The designer was affiliated to any particular system.  He visited our home, we discussed what we wanted the system to achieve, and the pros and cons of different systems were discussed.  The designer then produced a plan, showing which cables needed to go to each area of the apartment from the hub.

As a result of these discussions we decided upon a system by Netstreams called ‘DigiLinX’.  This system can transmit the audio signal around the home, and is scalable to almost any number of rooms.  The system only transmits component rather than HD video, so we will be integrating Netstreams with an HDMI matrix.  It integrates to the other items which we would like to control by way of the hub communicating to the 3rd party components using RS232 devices.

Other comparable systems to Netstreams are Control4, Crestron and AMX.

The Netstreams system is basically hard wired using a combination of Cat5e, Cat6, Siamese (this is a Netstream’s cable comprising a low voltage power cable and Cat5e bonded together) and speaker cable.  It takes time to draw the cables from each source to the hub.  The cables need to be treated carefully, as tugging will cause damage.  It is essential to have a coding system for each cable, because by the time you have finished there are going to be a lot of cables.  Our system comprised ‘LR’ for ‘living room’, ‘DR’ for ‘dining room’ etc, with each one having an ascending number.  This enables you to locate the use of each cable at both ends of the run.  We used a ‘RhinoPro’ handheld printer.

It’s also important to have a proper containment system to support all of the cables.  They do build up and are quite heavy.

Following the installation of our structured cabling for our Home Automation system, we completed the duct work for the MVHR, and closed up the ceilings.